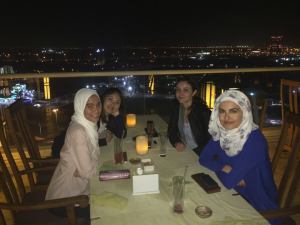 Thanks to Rana (for inviting me to her twin sister’ wedding)

As an expat, an invitation to one of these things is as common as hen’s teeth.. and I’ve always wanted to experience this thing (even if i have appointment for my chest surgery that day, i will make sure that i will still go ! 😀 )

on note – when i asked most of my emirati friend about what should i bring for the wedding gift, whether they accept cash or present, and if present what the usually,they give .. most of my friend told me either gold or perfume.. and me like errr… hmm… (X:X)

Actually, an Emirati wedding reception is just like any other reception, differences is that the couple has usually already been married for the last couple of months, either mostly, in Indonesia, I believe the reception/party will held the same day or the next day of the akad nikah..

The place is in Al Mizhar Wedding hall, somewhere after Al qusais,,i think it was my first time too to roam around that area. I went with Nofy, as she was in Dubai for a couple of days. Rana told me to come at 2000 , as i and taxi driver roaming around trying to find the place, me reached the place at about 2115 ..

first things first, I was surprised there is no receptionist.. (wow.. everyone can just enter then.. what if in my country like this, i wonder who’s gonna be coming inside the hall.. hehe!)

let me describe the hall.. It wasn’t very big one (according to Emirati) . There were only 15 tables, each seating 10 . Everything, and I mean EVERYTHING was white. The chairs were covered in white silk fabric with big bows tied into the back. Each table had a candlelit mini-chandelier with a large bouquet consisting of white hydrangeas, roses and peonies in the centre. When i entered the room , i think one of the bride’s family is spreading dirham and usd notes for the kids. (as far as my eyes caught the situation and the notes, it is maybe 10 dollars and the dirham is 100 (bcause seriously, the notes colour is red!!) OMG…(T_T )… the kids were so happy trying to catch as many as they can. whats in my mind straight away is “can i join it as well?”

Rana guiding me to our table, i was sitting with ahood, one of former colleague at the airport.

When i Reached the table, it already full with foods and i can see two boxes in front of me. one is big box and the other is small box. 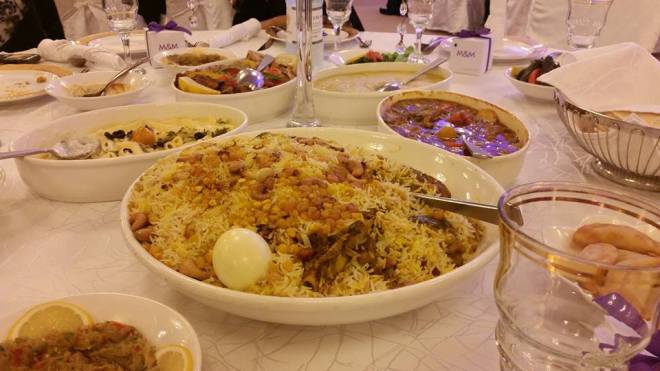 well.. i didn’t know that the food served in the table is not to be there until the party finished. (if only i know, i will eat much,and not little, slowly and was waiting till later) X_X

the server took all food from our table and change it with the cookies .. much cakes, cookies and pudding. and i was really glad that they served umm ali.. my favourite ❤ ❤ ❤ 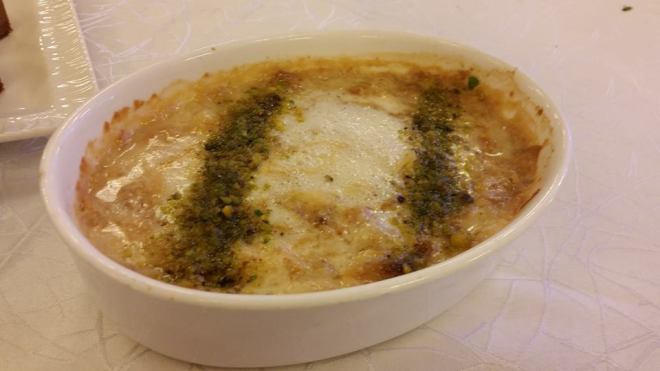 not long after that, they served us with tea and arabic coffee spiced with cardamom, with the strong and its unique smell..  it poured into beautiful Moroccan-style teacups. Tea, sweetened with condensed milk, (a local favourite) served in tiny, porcelain cups and saucers gilded with silver leaf. And another local traditional tea, the slightly bitter but still delicious za’atar tea poured into tiny crystal goblets. There was really no shortage of refreshments .

but.. The bride is not in the room yet.

I observed the other guests in the hall and found myself put to shame by the sophisticated confections of sartorial giants. Chanel, Versace, Louis Vuitton, Prada. Every single person that in the room looked better than movie stars. They looked amazing. And guess what? I couldn’t exactly blend in… LOL

around 9 pm i could see the bride is coming in.. the bride was the most beautiful.. i can feel my jaw dropped and i can’t even blink my eyes because she is just too much pretty. she was wearing a very sexy dress as well.. there is another differences in this one.. we are not allowed to take bride’s picture (only the family)

and by 10.30pm, the room which is a sea of jewel-coloured dresses. Emerald, sapphire, ruby.. A rainbow of couture is now not more than a veritable Mexican wave of black spread over the room from back to front. The ladies were all throwing their black abayas back on and covering their hair with their shelas.

and even the bride , she is wearing now a nice white gown and covered herself with some head cover (the head cover is just like a japanese bride costume, seriously!)

This whole situation mean only one thing – a man was about to enter the room … i can see the groom and his parents entered the room ..

** appereantly, the small box is tasbih and the big one is chocolate..very tasty and delicious chocolate.. ❤

I wish Allah, will let me and nofy experience our own wedding soon.. O:)